In the previous post, we learned what a messaging system is and the Role of Apache Kafka. In this post we will dive deep into Apache Kafka – We will learn Kafka cluster, brokers, topics, partitions, replicas, producers, consumers, consumer groups, Zookeeper, and how together make Kafka work.

Most of Kafka revolves around Kafka Cluster, Broker, and Topics, so let’s start our discussion with Kafka Cluster and Broker. 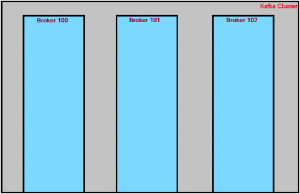 A Kafka cluster is composed of multiple brokers (machines). A broker is an actual server/machine on which data resides.

In other words, we can say that a Kafka Cluster uses multiple machines and each machine is called a Broker.

Example: Suppose there are 3 server machines – each machine is called a Broker, all 3 machines combined together are called Kafka Cluster. Each Broker in the Kafka cluster will be identified with a numeric id (100, 101,102 …).

More on brokers once we understand Kafka topics.

So what is a Topic? – It’s a particular stream of data or in words, it’s a holder of particular messages. It’s similar to a table in a database – a table has a name and the table holds only a particular type of data, there can be millions of rows in that table, but of the same type. e.g. an employee table – has some columns and the data stored / rows are related to an employee (like name, age, dept, role, etc.).

Similarly, in Kafka, every Topic has a name (more on naming conventions later), and a particular stream data /message is stored in a topic. e.g. stream of employee data.

In Kafka – each topic is split into partitions – Each topic can have 2 or more partitions, the best practice is to provide 3 partitions per topic. Each partition will have numbers that start with 0(zero) and can go to infinite numbers.

Note: while creating topics in Kafka, you need to provide the topic name, no. of partitions, and replication factor. – More on this later in the post.

Topics Hold stream od Data / Message, every message in each partition will get an incremental id – this id is called an offset. If 5 messages are sent to 0 partitions so the first message coming in will have offset 0, next will have 1, and so on. Similarly the with being offset id for partition 1 and partition 1 and 2